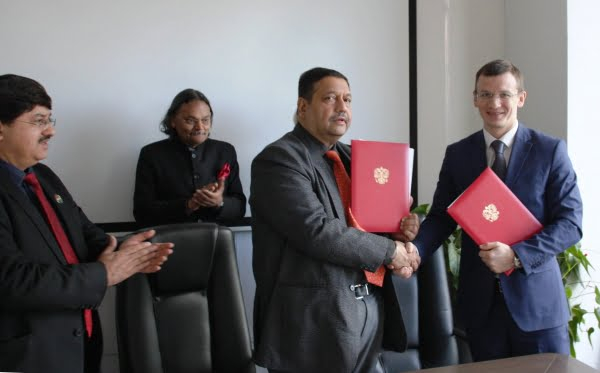 Leningrad region is the first region in Russia which has got an opportunity to promote its investment advantages for importers in one of the largest world economies – India.

During its first visit to Russia the delegation of Indian Importers Chambers of Commerce and Industry visited Economic Development Agency of Leningrad Region in order to establish business relationship. Director of the Agency Andrey Sergeev and the President of the Chamber Atul Kumar signed a memorandum of cooperation.

The parties will work on creation of the network of information and business consulting centers of the Agency in India, Sri Lanka, Nepal, Bangladesh in order to attract investments in Leningrad region – the first region in Russia which has concluded the memorandum with India.

Another direction of cooperation which attracts enterprises of Leningrad region is export of products to the enormous consumer market of India (1.3 billion people live in the country) and to neighbouring countries which have effective connections with Indian Importers Chambers of Commerce and Industry.

The most promising spheres in the Russian-Indian economic ties are pharmaceutical industry, food industry, defense industry and fast-growing IT sector.

Indian Importers Chambers of Commerce and Industry unites 200,000 members from India and neighbouring countries. The heads of the Chamber and its members are businessmen interested in establishment of contacts which result in real deals. The headquarter is located in Deli and the Chamber has representative offices in all Indian states and in 62 countries in the world.