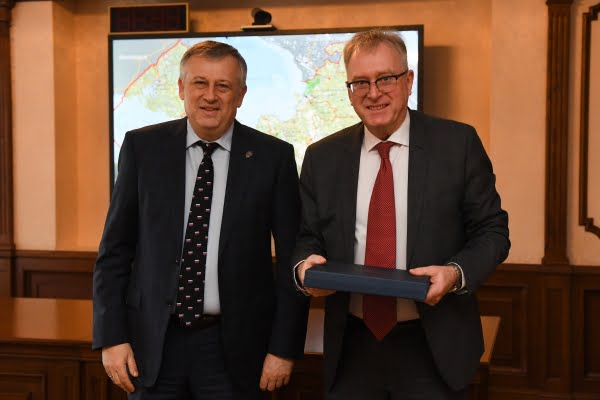 Promising directions of cooperation were defined during a meeting of the Governor of Leningrad region Alexander Drozdenko with the Ambassador Extraordinary and Plenipotentiary of the Kingdom of Norway in the Russian Federation Rune Resaland.

“We have long-standing friendship relations with the Kingdom of Norway, with partner county Nordland, we also have seven intermunicipal agreements. And all these connections are working today, they are absolutely mutually beneficial and within public diplomacy they work for the benefit of the residents of both countries,” noted Alexander Drozdenko.

Priorities of the dialogue: aquaculture, industrial parks and educational exchanges at the level of schools and universities. For example, students from Leningrad region do internship in a Norwegian Nord University at professions required in Russia.

“We have gained rich experience of collaborative work and, what is important, economic cooperation is also developing. For example, trade turnover between the Kingdom of Norway and Leningrad region came to 53.5 million dollars, and in 2018 – to 200 million dollars. Norwegian companies successfully work in the region including those dealing with gas pipeline facilities on Nord Stream 2,” said the Governor.

The parties noted that another promising direction is shipbuilding: in May 2018 a shipbuilding cluster was created in Leningrad region. It includes six enterprises and cooperates with Norwegian suppliers in designing, shipbuilding, provision of equipment for vessels, such as fishing trawlers and tows.

Rune Resaland thanked for the meeting and the presentation of the region and noted that neighbourhood with Russia is very important for Norway and over last 25 years the countries have managed to develop fruitful cooperation in many spheres. He said that interaction with Leningrad region, which has attracted the largest Norwegian investments within the last years, is very close and regional cooperation between the region and Nordland county is extremely important for strengthening trust and stability between two countries.