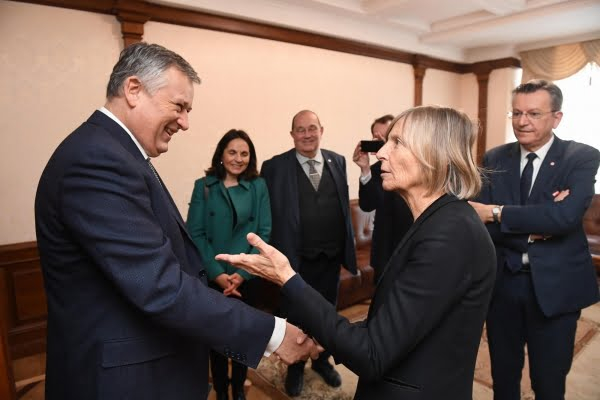 The Governor of Leningrad region Alexander Drozdenko held a meeting with the delegation of the Foreign Affairs Committee of the National Assembly of France. Among the discussed issues were development of economic ties and establishment of twin-city relations with a partner region.

“Our region actively works with French business, enterprises with French capital have been operating in the region for a long time. This sphere is developed better than the sphere of public diplomacy. Usually economic ties follow humanitarian ones, but it is vice versa for us – economic connections have the lead. We are actively working with our French colleagues and Consulate General of France in Saint Petersburg in order to find a twin province for Leningrad region. In January we had negotiations in Rouen which will lead us to conclusion of an agreement with Normandy,” noted Alexander Drozdenko.

Chairman of the Committee Marielle de Sarnez thanked the Governor for the meeting and the presentation of the region, expressed willingness to provide possible assistance in conclusion of a cooperation agreement with Normandy and to contribute to development of economic relations between Leningrad region, Russia and France. She mentioned historical similarity, close cultural relations, necessity to find areas of common interest and develop cooperation. The parties expressed their hope that the current crisis in the Council of Europe would be overcome.

The Governor believes that participation of the delegation of the Russian Federation, headed by him, in the Congress of Local and Regional Authorities of the Council of Europe in Strasbourg shows that maintaining connection allows solving many issues. “We feel that we are the members of the European family, we do a lot according to recommendations for development of local and regional democracy which we receive from the Congress. And we give many “novellas” for the Congress and self-governance – smart cities, e-government, open budget,” said Alexander Drozdenko.

Today Leningrad region does not have cooperation agreements with the region of the French Republic. A twinning agreement between Tikhvin and Hérouville-Saint-Clair is valid since 1991 on the municipal level. Over the last years several joint events in the spheres of culture, sport, education, exchange of experience in municipal government have been carried out.