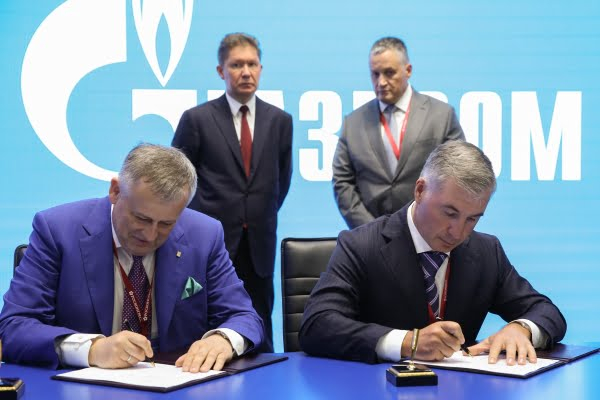 The largest industrial cluster of gas processing, gas and chemistry in the world will be created in Ust-Luga.

An agreement on social and economic cooperation within implementation of a project was signed during St. Petersburg International Economic Forum by the Governor of Leningrad region Alexander Drozdenko and CEO of RusKhimAlyans Kirill Seleznev. The Chairman of the Board of Gazprom Alexey Miller participated in the signing ceremony.

A new complex for processing of ethane-containing gas and production of liquefied natural gas (LNG) will be created near Ust-Luga, Kingiseppsky district. The project is operated by a special purpose company RusKhimAlyans established on a parity basis by RusGasDobycha and Gazprom. The total capital investments at the investment justification stage amount to about 750 billion rubles, after development of project documentation the sum can be changed.

“The project of RusKhimAlyans is new-generation investments which involve not only creation of industrial site, but also cooperation in comprehensive development of the territory and labour resources. Leningrad region is interested in the project and such reliable partner as RusKhimAlyans,” noted the Governor of Leningrad region Alexander Drozdenko during a signing ceremony.

Commissioning of the first phase of the complex is planned for the second half of 2023, of the second phase – by the end of 2024. Launch of the enterprise will allow expanding Russian export of liquefied natural gas and liquefied petroleum gas by 30-40%.